Five Mistakes That Can Ruin a Summer Cookout 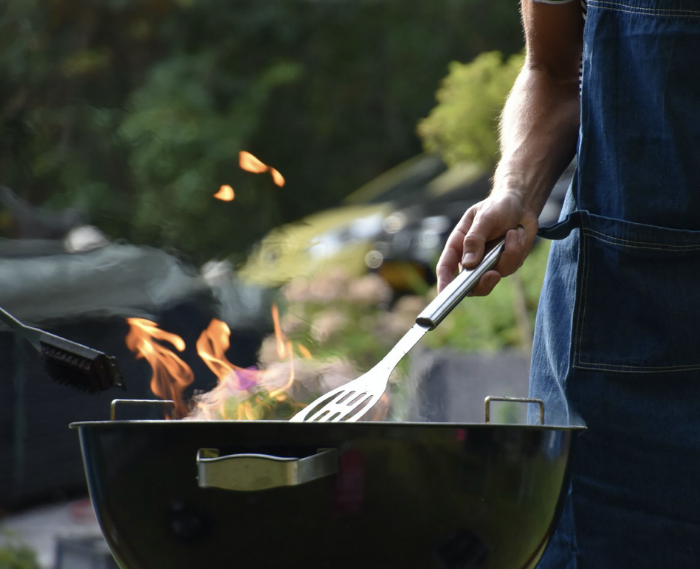 I have a confession to make: I sometimes find it hard to relax at a cookout or pool party. While other guests are chatting away and happily sipping on cold drinks as the meal is being prepared, my food-safety radar is usually going off the hook. The thought bubble over my head probably reads “Oh-no—they’re using the same plate for the cooked and raw meat—I guess I’ll stick with the vegetarian option.

You may think I sound nitpicky, but you won’t when you hear the statistics. The Centers for Disease Control and Prevention estimates that 48 million people in the United States get sick from food-borne illness each year, and it happens most commonly during – you guessed it – summertime. Food made right in our own back yards is often the culprit, so the next time you have a summer cookout, avoid the most common food safety mistakes by keeping these simple do’s and don’t’s in mind.

DON’T: Baste meat with the same marinade it has been sitting in

When it comes to food safety, it is vital to prevent raw meats from touching ready-to-eat foods, as raw meats are often sources of bacteria that cause foodborne illness. Luckily, the cooking process kills these pathogens, but if you baste your meat with the same liquid it has been marinating in all day, especially right before you pull the meat off the grill, there may not be enough time for the heat to get the job done.

DO: Set some unused marinade aside for basting, or boil it

Before adding the meat to the marinade, set some marinade aside in a separate container to use to baste the meat on the grill. Another safe option is to boil the marinade that the meat has been sitting in; the boiling process will kill any foodborne pathogens. One more tip: avoid basting the meat right before it comes off the grill. The clean brush still touches undercooked meat, and the cooking process may not extend long enough to sterilize the marinade. Lastly, make sure you toss or boil any leftover basting liquid!

DON’T: Use the poke method

Cooking meat, poultry and fish to the right temperature is critical for both food safety and taste. If it’s undercooked, it could easily put your guests at risk for foodborne illness, and if it’s overcooked it winds up dry and tough. Don’t rely on the poke-and-guess method to check for doneness—it’s not worth the risk.

DO: Use a food thermometer

The best way to ensure your food is perfectly cooked is to use an instant-read food thermometer. This handy tool can be found at most houseware stores and is fairly cheap (some are just around $10). The Agriculture Department recommends the following cooking temperatures for meat products: 145 degrees for steaks and chops (with a three-minute rest time), 160 degrees for ground meat, 165 degrees for poultry, and 145 degrees for fish. That doesn’t mean you won’t ultimately opt to cook your steak medium-rare (about 135 degrees) if that’s how you prefer it, just like you might eat your eggs with the yolks runny despite government warning. But at least you will be doing it knowingly.

DON’T: Use the same cooking utensils for all food

The number one food safety rule reveals itself again: do not let raw food come into contact with ready-to-eat food. Using the same tongs to move the raw steak onto the grill as you do to move a cooked steak off the grill is a recipe for a foodborne illness outbreak.

DO: Use separate, clean utensils for raw and cooked food

It is helpful to grab two sets of all cooking utensils and serving platters, making sure to designate one set for raw food and one set for cooked, ready-to-eat food. Some companies even make color-coded utensils, making it easier to distinguish between the two sets when you are slaving away at the meal you’re providing to your summer cookout guests.

Another way foodborne illness can occur is through lack of simple hand sanitation. In the summertime, parties are often held outside where there is not immediate access to a sink and soap. Reaching in the snack bowls throughout the day, as guests so often do, doesn’t help the issue either (and is one of my big pet peeves—please everyone, keep your hands out of the bowl!)

DO: Keep hand sanitizer nearby and a serving utensil in every bowl

When you are setting up for your cookout, put out plenty of hand sanitizer (at least 60% alcohol) especially near areas where food is being served. This simple action will help remind guests to clean their hands before touching food. Setting out plates for snacks, and putting a serving utensil in every bowl will also encourage guests to serve themselves and eat away from the table rather than hovering over the chip bowl and double-dipping with their bare hands.

Once the food is served, it always seems to sit until A) the party is over, or B) the guests clean out the leftovers. It is just plain risky for food to sit out without appropriate temperature control. Foodborne illness-causing bacteria grow at temperatures between 40 and 140 degrees. 2 hours is all it takes for the bacteria to ruin the food, and, subsequently, your guests’ stomachs.  If it’s hotter than 90 degrees outside (which is obviously more likely to happen during the summer), the time limit drops down to 1 hour, putting guests at an even higher risk of contracting a foodborne illness.

DO: Set a timer, stagger serving, and hold food at the right temperature

The easiest way to remember when to put food in the fridge is to set a timer for either 1 or 2 hours, depending on how hot it is outside. If guests are stopping by over the course of the day, stagger the serving times of the dishes. If food must stay out past the 1-2 hour limit, set up proper temperature control measures. For cold dishes, place them on a bed of ice or an ice blanket. For warm dishes, set them on a side rack on the grill or hold in a 200-degree oven. These measures will help to protect both the taste and safety of the food so everyone will leave feeling good.