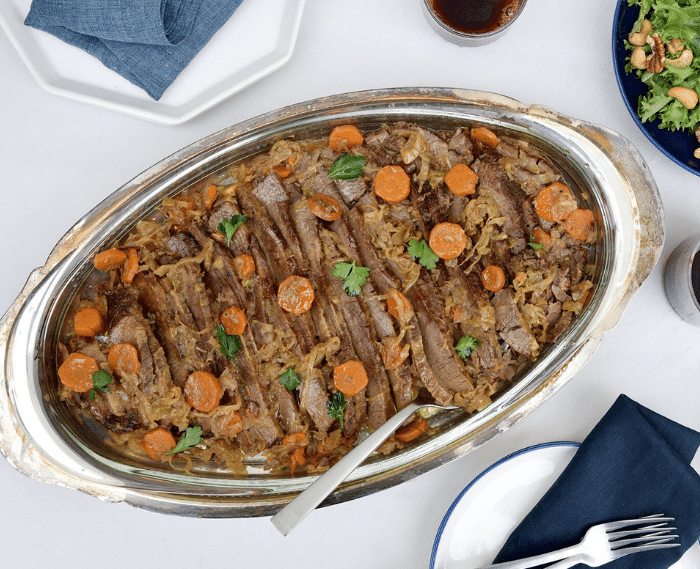 This is a Story about Mother’s & Daughters & Breaking Tradition, with a Passover Brisket Recipe

One would think attending the first Passover dinner hosted by your daughter would be a mother’s pure joy, but my mine was becoming unhinged. No one peering into my kitchen that afternoon would have guessed–she was outwardly calm and her voice measured, at first, anyway.  But as daughters are uniquely wired to do, I can detect even the smallest flicker of disapproval in my mother’s expression, and this was a rapidly building storm. Apparently, I had done the unthinkable. I cooked the brisket in the oven.

“You always have to thumb your nose at tradition.” She eventually spit the words at me. Then her disappointment and resentment turned to tears. “I remember being a little girl, arriving at my grandma’s house, seeing all the pots bubbling on the stove….we have always made our brisket on the stove! But you have to do things differently.”

“Geez mom, it’s only a piece of meat. What’s the big deal?” She fled the kitchen and I stood there perplexed and enraged at her outburst. I took it out on the potatoes I was mashing. I know my family has traditionally cooked the holiday brisket in a pot on the stove. But if I am being totally honest, it could sometimes taste a little thin. Now that I was passed the torch I was eager to reconsider it. I wanted mine to have essentially the same flavor, but more intensely so, and I found the oven to be the answer. Cooked uncovered during the last hour, the meat and onions become deep brown and caramelized, and the juices in the pan concentrate so the whole dish brims with savory flavor. Besides, using the oven was more convenient because it required less monitoring. I thought my mother was being ridiculous and I was hurt that she had cast a shadow on the day.

Mashing the big pot of potatoes helped calm me down a bit, and my mom apparently had some time to think too. Stepping back into the kitchen, she apologized for her outburst and confessed how hard this day was for her. Sure, she was happy that I could take over the holiday, but the transition also forced her to face a difficult truth. She was now the elder. “I’m next to go,” she lamented softly. Seeing the brisket cooked differently unexpectedly set her off, making her confront the inevitability of change and deeply miss her mom, dad and grandma. But then she told me, chuckling to herself, she remembered a story that made her rethink her fixation on how the meat was cooked: A young newlywed was making a roast for the first time in her shiny, new kitchen. She didn’t need a recipe because all her life she had watched her mother do it. The first thing she did was slice about an inch off the end off of the hunk of beef. When her husband asked why she did that she said, “I don’t know. It’s something my mother always did.” She called her mom to find out the reason, but her mom’s answer echoed her own. It was something her mother always did. The mom called the grandma: “Why do we cut the end off of the roast before putting it in the pan?” Grandma answered matter-of-factly. “I just do that because my pan is too small to fit the whole thing.”

My mom and I laughed, and laughed, then melted into a long hug. Maybe her grandma cooked the brisket on the stove because she had no room in her oven? Maybe she didn’t have oven at all? We agreed that how I made the brisket was unimportant. What mattered is that we were together as a family, lighting candles, eating matzoh and telling the Passover story. At a the holiday which endures because of tradition and celebrates freedom, I contemplated how tradition itself tethers us to past generations and reminds us of who we are, but how it can also chain us, preventing us from evolving and creating.  When do traditions matter and when do they hold us back? Maybe the answer is asking “why?” in the first place, a question that is central to Passover as well. I don’t know exactly how to strike the right balance between “thumbing my nose at tradition” and honoring it, but I do know my mom and I became infinitely closer that day, and that brisket was darn good.

Preheat the oven to 350 degrees. In a small bowl combine the paprika, 1 teaspoon of the salt and ½ teaspoon of the pepper. Sprinkle the mixture on both sides of the meat and rub it in a bit.

Distribute the onions, carrots, celery and bay leaves on the bottom of a large roasting pan. Place the meat on top of the vegetables, fat side up, then cover the pan tightly with foil and cook until the meat is nearly fork tender, about 3 hours. (No added liquid is needed.)

Transfer the meat and the vegetables with the juices to separate airtight containers and refrigerate overnight or for up to two days.

When ready to serve, preheat the oven to 350 degrees. Trim the layer of fat off of the meat, then slice it thinly across the grain, keeping the slices in place so as to maintain the original shape of the brisket. Transfer the meat, still in its original formation, to the roasting pan.

For a leaner gravy, trim off any solid fat from the top of the container of vegetables and pan juices. For a richer gravy, leave at least some of that fat. Pour the vegetables and juices over the meat and around the pan. Cover tightly with foil and cook for 45 minutes, then uncover and continue to cook, basing the meat occasionally with the pan juices, until the meat is fork-tender and had browned somewhat, 45 minutes to 1 hour more.

Transfer the meat to a serving platter, season it with ¼ teaspoon salt and 1/8 teaspoon pepper and cover it with foil to keep warm. Remove some of the vegetables from the juices to use as garnish if desired. Strain the remaining vegetables from the juices, discarding the vegetables. If the juices are nicely reduced and flavorful at this point, season them with the remaining ¼ teaspoon of salt and 1/8 teaspoon of pepper. If the juices seem a bit watery, place them into a medium saucepan, bring to a boil and cook over a high heat until they have reduced a bit, 5-10 minutes, then season them with the remaining salt and pepper.

To serve, pour about half of the juices over the meat on the platter and scatter with the reserved vegetables if desired. Serve with the remaining juices as a gravy alongside. 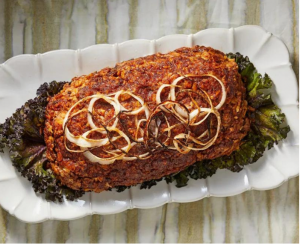 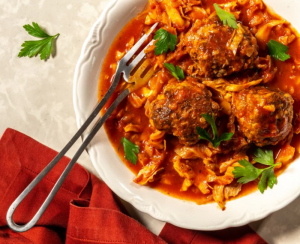 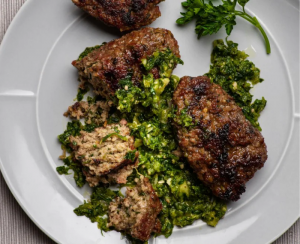