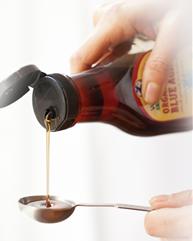 Depending on who you talk to, agave nectar is either pure goodness sent from the heavens or something from the labs of Dr. Evil. This is often seen with foods, where we build them up to a “super food” status, only to knock them down. But sometimes things aren’t as black and white as they may seem.

Agave is made from dessert plants, which also give us tequila. The juices of these plants are a sweet carbohydrate called inulin, which is extracted from the plant, filtered, heated and then treated with enzymes to convert it to sugar, which is marketed as “nectar.”

Agave nectar has a relatively low glycemic index, meaning it doesn’t spike your blood sugar as much as white sugar. It has a neutral flavor and can dissolve easily in cold liquids, like freshly brewed iced tea. It’s also sweeter than white sugar with the same amount of calories (16 per teaspoon), so you don’t need to use as much. Plus, it’s good for vegans who don’t eat honey.

Although I prefer less-refined sweeteners such as maple syrup, honey and molasses, which have some antioxidants and trace minerals, agave has its own distinct benefits and has a place in my repertoire of sugar alternatives. It doesn’t deserve its health halo though. Agave, like all added sweeteners, should be used sparingly.